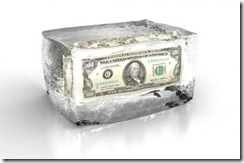 You know those banks that got bailed out last year? Of course you do. You remember, they took all your tax money and it seemed to disappear. Yeah, I see you nodding your head. You know the banks I’m talking about.

Well, I’m no expert (not about banks anyway), but here’s what I thought the idea was. They needed the cash so they could keep themselves afloat. And why do we want the banks to not shut down? Probably so they could keep making loans.

But this time, smart loans.

And yet somehow, the latest report shows that the 9 largest banks have stopped lending!

That’s right. Their rate of giving out loans dropped by 35% from December to January. Now, maybe you think, as some experts do, that they just upped their loans in December. If they gave out more early, then there’s less to do in January, right?

Loans dropped ACROSS THE BOARD!

I mean, come on, at some point, someone’s gotta need money. And qualify for a loan. But according to their reports, every sector has dropped. Residential home purchases, mortgage refinances, secondary home equity, commercial real estate, and construction!

So then the banks tried to claim that they were spending the money on restructuring existing loans instead of issuing new ones.

But according to the latest Treasury report loan mods dropped by even more! 56 percent!

You should really see this list of banks. Most likely, your bank is on there.

Oh well, I’m sure the government bailout money is being well spent . . . somewhere. Just hope I don’t run into the heads of Citigroup, Regions, SunTrust, etc. when I head on my next vacation.

I might just have to give them a piece of my mind. For now, why don’t you give me a piece of yours.