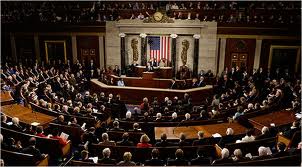 It’s that time again. Time when Americans across our great country decide that Tuesday night television just isn’t interesting enough so they flip channels over to the State of the Union address. Which will hopefully prove interesting enough to hold their attention long enough to hear at least two senators/representatives scream obscenities. It’s a long shot, but hey, this year there’s definitely what to hear.

Obama’s spin campaign has been hard at work prepping the nation for what everyone knows they’re going to hear: economy, war, economy, education, hard work and sacrifice, economy, etc. We know it’s coming and we know how divided Washington is on the issue. So are they really hoping people are going to tune in to learn something they don’t already know? For sure not. The most interesting part of the night is clearly going to be waiting for someone in the audience to just burst forth with insane ravings of conspiracies/nightmares in the White House. It’s like watching car racing: you know you’re just hoping for a crash, you just can’t admit it.

I think if you dig just a bit deeper you might see a slight silver lining (I think I’m mixing metaphors here, but let’s ignore that). 2010 was a bombardment of numbers, so many issues in the economy competing for space and attention that it’s hard to put things in perspective. Are we sinking, rising, balancing, back-pedaling? It’s hard to tell sometimes. So if Obama knows what he’s doing, he’ll take all of the chaos we’ve been through and just make some sense out of it. I don’t know how that’ll make him look, but it’s probably the best he can hope for.