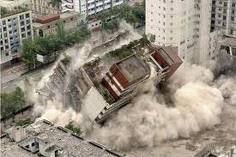 I just wouldn’t have put all those in the same thought, but apparently someone did. A top economist was asked if the housing market has hit bottom. He wisely avoided the question by pointing out people saw false bottoms before this. His two examples: 2010 with the tax credit, and 2011 with its . . . incidents (see above).

I’d say he has his economic priorities confused but he’s the expert and I guess I get his point. You can’t predict the market. You may think you see how government policies are going to affect things, but then natural disasters and foreign problems creep in and knock you down. Or you may plan for the worst but think the next big idea from Washington is going to keep you afloat.

But when it all comes down to it, real recovery, an escape from the real “bottom” is only possible through one thing: the resilience of the American market. Us investors moving along making the deals that bounce things back, training the next wave of pioneers in the housing market, and taking some small credit for the declining delinquencies and increasing short sales – we’re the ones who are poised to see the future.

So I leave the predictions to you guys. Tell me how hard you’re working and I’ll tell you how quickly we’ll recover. Show me the deals you’ve made and I’ll show you strength of our economy. And most importantly, show me you’ve got a plan for an awesome weekend and I’ll show you mine! Till next week!